Abe Under Siege SAY NO to the Abe Government! Bring back democracy! No war!

Abe Under Siege SAY NO to the Abe Government! Bring back democracy! No war!
Protest in Shibuya & Harajuku

Despite a disapproval rating of over 60% among the public, the security bills were passed following a plenary session in the Upper House in the early hours of September 19, 2015. The government turned its back on the protesters in front of parliament and ignored the voice of opposition lawmakers. In fraught scenes uncommon for Japan’s normally sedate parliament, opposition lawmakers climbed on top of each other in a bid to stop the chairman of a committee calling a vote on the controversial bills.

Although this was a humiliating day for Japan, it was also the start of a new day of hope since it helped galvanize our voice and the voice of opposition lawmakers, providing a direct link between the people and politics. On top of this, it reaffirmed our drive to oust the Abe government.

Opposition voices to the security bills last summer led directly to a determination to oust the Abe government and this determination is only getting stronger. However, the mistrust and dissatisfaction in the Abe administration extends beyond the security bills to a host of other issues that include nuclear power and the U.S. army base in Okinawa. These policies diminish our safety and our way of life while depleting Japan of its national wealth. For these reasons, it has drained our patience.

We believe that the only thing left to do is get the Abe administration to resign for its unconstitutional actions and fascist stance. The Upper House elections this summer are our next focal point and we intend to push full steam ahead with our campaign, SAY NO to the Abe Government! We WILL take back democracy in Japan.

▼Notes
○Please make appropriate preparations for weather, especially fluid for rehydration and rain gear.
○First-time participants welcome.
○Approach staff if you feel unwell.
○Solicitation to participate in religious or other groups is strictly prohibited.
○Please do not distribute any printed material to participants that has not first been approved by organizers.
○This action is a non-violent action. Please only participate upon understanding of this policy.
○No drones allowed.

▼Seeking other advocate groups We are currently looking for other groups and organizations that are in agreement with what we stand for. We will release the names on our website of each group/organization that registers with us. Register here: http://abe-no.net/賛同のお願い

▼Help us with flier distribution We will send you the fliers free of charge. Help us to spread the word to as many people as possible. 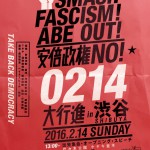 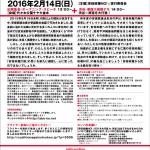 ▼Help us with a donation for the event
The “SAY NO to the ABE Government! February 14 Protest” is run solely on donations from ordinary citizens. Please help us to continue our work with a donation.
○From Japan Post Bank (at Post Offices):
Account name: 首都圏反原発連合 (“Shutoken han-genpatsu rengo”) Account number: 00170-1-291074
○If you deposit from another bank, use the branch number 019 with 0291074 as the account number (Account type: Toza (当座)).
*Please put “1002 kanpa” in the reference section.

▼Use the power of the internet!
Send a message to PM Abe and voice your disapproval
ABE UNDER SIEGE: http://abe-no.net/approval/