We will be calling for a halt to the restart of Sendai Power Plant as well as all other power plants and the abolition of power plants in Japan.

Come along and take part in this big mid-summer protest!

Help us by tweeting the following message:

Details:
<Speeches>
To be announced.

Appeal:
The Nuclear Regulation Authority released a report stating that its investigation found that the Sendai Nuclear Power Plant satisfied all new regulations and standards. The government and Kyushu Electric Power seized on this opportunity to push ahead with plans to restart the facility. However, the Sendai facility has a high risk of explosion and is riddled with problems such as an ineffective evacuation plan, and as such, it should not be restarted under any circumstance.

Initial plans to restart the facility have been stymied due to movements by the many people who wish to see an end to nuclear power and pressure from the general population. As a result, it has been announced that the power plant will be restarted after autumn. We are currently in the first summer since the Great East Japan Earthquake of March 11, 2011 that Japan has not fired up any nuclear reactors. The precedent of getting through summer without the use of nuclear energy gives further affirmation to public opinion concerning the viability of ridding Japan of nuclear power going forward.

The Abe administration has chosen to ignore popular opinion regarding the desire for zero nuclear power plants and indirect democracy has become dysfunctional. Accordingly, we need to raise our voices and make our opinions heard in order to halt the restart of this facility. The protest on August 30 in front of the Diet Building provides the ideal platform to voice our disapproval at the government and demand an end to nuclear power in Japan. Let’s show the government exactly how we feel and put direct pressure on them to listen to the people. Please join us for this mid-summer protest. The more people the better.

Announcement:
Due to construction on sewage and waterworks, the standard Friday evening demonstrations in front of the Prime Minister’s residence and Diet Building will be reallocated for the two-week period starting the end of October 2014. An alternative venue will be announced at a later date. The summer special protest on August 30 will mark the last big protest planned for this area for the time being.

In line with this, we plan to include a number of speeches supporting the anti-nuclear movement at the summer special event.

Notes:
– Please make appropriate preparations for all weather conditions.
– First-time protesters welcome.
– Approach staff if you feel unwell.
– Make sure all banners and signs are related to the anti-nuclear movement.
– Solicitation to participate in religious or other group strictly prohibited.
– Please do not distribute any printed material to participants that has not first been approved by organizers.

Please help with donations for this event:
You can donate directly on the day to staff members calling for donations, or donate to the following: 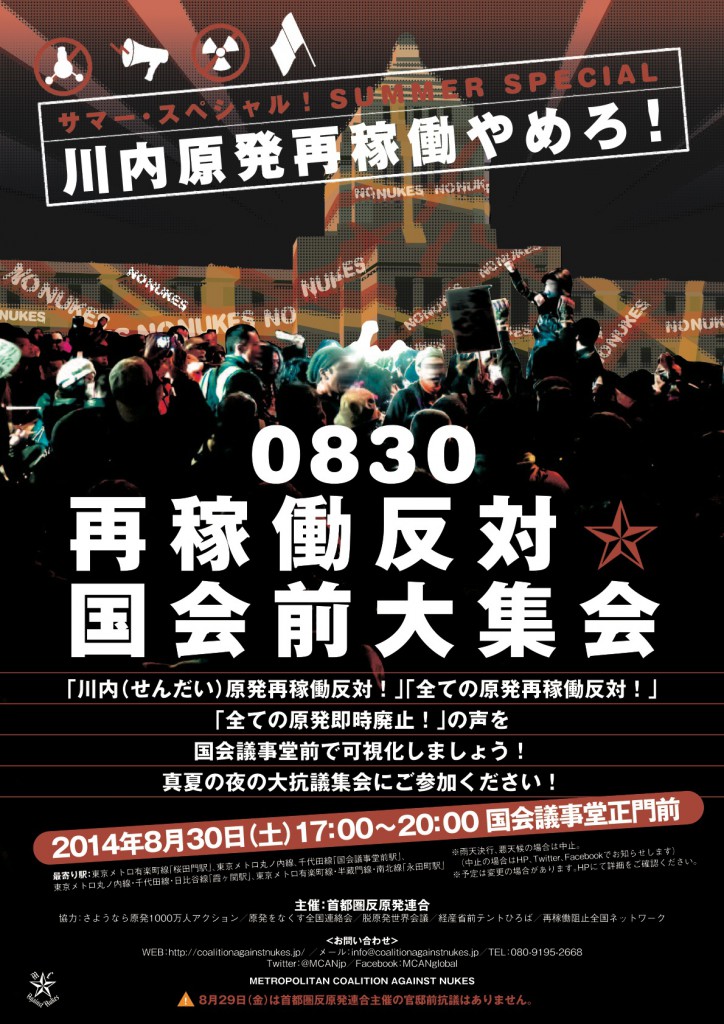 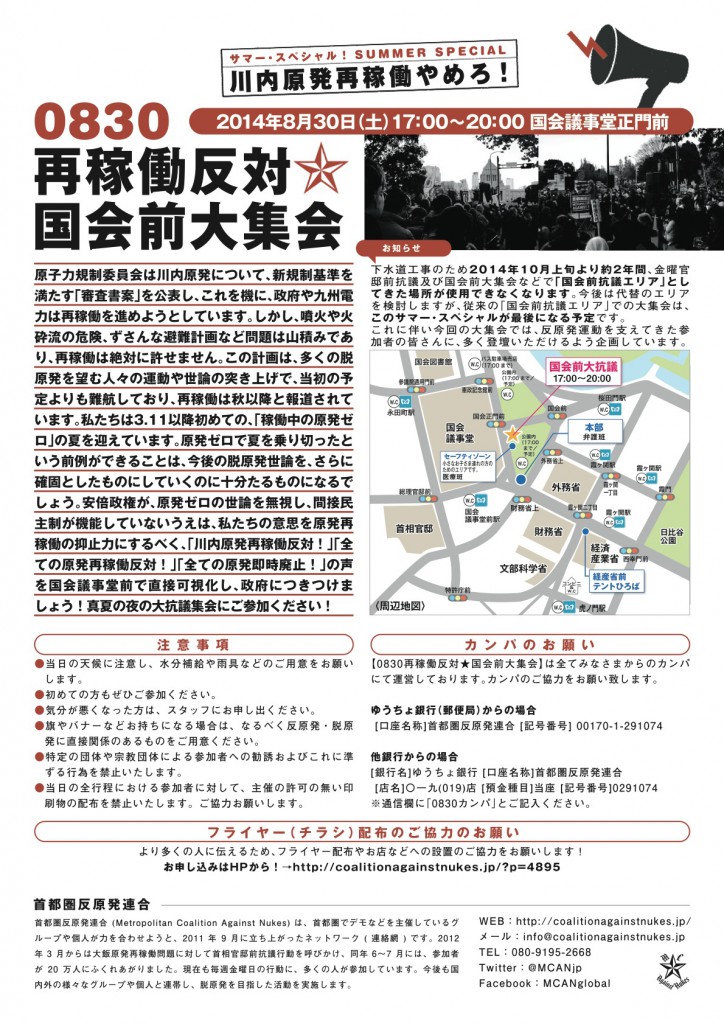