No More Nuclear Plant Restarts!
Protest in front of the PM’s office

Final chant by the rapper ATS
(titles omitted; order based on Japanese syllabary)
*Plans are subject to change.
*Information on speakers will be updated as required.

March 11, 2011 is a day we will never forget.
Five years have passed since the Fukushima nuclear disaster, and although for a while Japan was heading toward the abolishment of nuclear power by 2030 under the Democratic Party, the Liberal Democratic Party has returned to a policy of holding on to and promoting nuclear facilities as part of their autocratic leadership style. However, overwhelming public consensus shows that people still want to see an end to nuclear power, and every Friday evening for the past four years a large number of people turn out to protest the government’s nuclear policy. Even though five long, tough years have passed since the nuclear disaster, there is still no resolution in sight, and radioactive water continues to leak into the sea. On top of this, many people who evacuated because of the disaster have still not received proper compensation. Despite this, the Abe government callously and in great haste seeks to restart nuclear facilities simply to maintain certain vested interests.
We must learn from the Fukushima nuclear accident and waste no time in abolishing nuclear power in Japan and reinstating the nuclear-free energy policy. Otherwise, we will never be able to regain what was lost in the disaster. We hope that people fully understand and recognize the situation in Fukushima so that we can head toward a society that more truly values the lives of each and every member.
On March 11, 2016, we will make a new pledge to realize a nuclear-free Japan. Join us!

▼Notes
○Please make appropriate preparations for weather, especially fluid for rehydration and rain gear.
○First-time participants welcome.
○Approach staff if you feel unwell.
○Solicitation to participate in religious or other groups is strictly prohibited.
○Please do not distribute any printed material to participants that has not first been approved by organizers.
○This action is a non-violent action. Please only participate upon understanding of this policy.
○No drones allowed.

▼Help us with a donation for this event
This event is run solely on donations from ordinary citizens. Please help us to continue our work with a donation.
○From Japan Post Bank (at Post Offices):
Account name: 首都圏反原発連合 (“Shutoken han-genpatsu rengo”) Account number: 00170-1-291074
○If you deposit from another bank, use the branch number 019 with 0291074 as the account number (Account type: Toza (当座)).
*Please put “0311 kanpa” in the reference section.

▼Help us with flier distribution. We will send you the fliers free of charge. Help us to spread the word to as many people as possible. 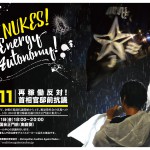 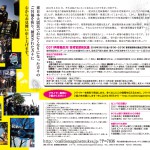